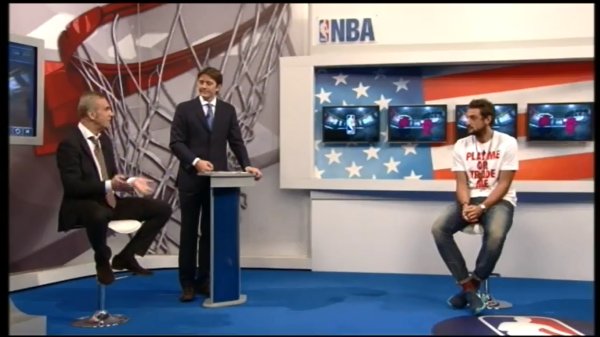 The National Basketball Association (NBA) has expanded its partnerships with Turner Broadcasting System, Inc. and The Walt Disney Company through new, nine-year agreements under which ABC, TNT, and ESPN will televise NBA games beginning with the 2016-17 season and running through the 2024-25 season.

Under the agreements, the partners will televise more national regular-season games (ABC/ESPN: 100; Turner: 64) and will continue to do so generally on Wednesdays (ESPN), Thursdays (TNT), Fridays (ESPN), and Sundays (ABC/ESPN). By the end of these new agreements, the NBA’s partnership will reach 41 years with Turner, while the league’s relationship with ABC/ESPN will extend to 23 years. Additionally, NBA TV’s Sunday, Monday, Tuesday and Saturday game telecasts will continue to fill out the schedule, ensuring a full week of nationally televised games. The NBA’s 24-hour network will present over 100 regular-season games each year.

The NBA and Turner will also continue their groundbreaking partnership to manage jointly the NBA’s digital assets including NBA TV, NBA.com, NBA Mobile, NBA LEAGUE PASS, and WNBA.com, which Turner operates out of its Atlanta production facility. TNT will also debut the first-ever NBA Awards Show, an annual event which will air at the end of the season, and will have expanded activation opportunities surrounding key NBA pillars such as Opening Night and NBA All-Star Week.

Under the agreement, ESPN will be granted enhanced digital rights to provide NBA content for multiple ESPN platforms, including ESPN.com and WatchESPN.

The parties have also established a framework for ESPN and the NBA to negotiate the launch of a new over-the-top offering in which the league would receive an equity interest. Details for the new offering will be announced at a future date.

Under a new deal with the WNBA, games will continue to be televised on ABC and ESPN/ESPN2 through the 2025 season. ESPN also will have enhanced in-progress highlight rights for the WNBA on digital and linear platforms. Beginning with the 2016-17 season, for the first time, at least 20 NBA Development League games and NBA Summer League games will be seen on the ESPN television networks.

Turner Sports will have enhanced content/digital rights to NBA content for multiple TNT platforms including Bleacher Report; interactive online elements such as selected camera angles, statistic feeds and video to complement TNT’s telecasts; and broadband and other content for digital platforms, including highlights and studio shows. This includes the opportunity to develop and distribute new NBA content and programming for Bleacher Report, as well as rights to highlights for incorporation into the brand’s popular team and topic-centric Team Stream Now video offerings.

“The Walt Disney Company and Turner Broadcasting share responsibility for the growing popularity and interest the NBA enjoys, and we are thrilled to extend our partnerships,” said Silver. “With these new agreements, our fans will continue to benefit from the outstanding NBA coverage and programming provided by ABC, ESPN, TNT, NBA TV and their digital platforms.”

"These nine-year extensions with Disney and Turner recognize the extraordinary value of live premium sports," said Leonsis. "On behalf of our Media Committee and the other team owners, we thank Disney and Turner for their commitment to the NBA and its fans."

TNT will televise 64 regular-season games in primetime on an exclusive basis, an increase from 52 regular-season games televised during the current agreement. TNT will also offer exclusive presentation of Opening Night, the All-Star Game and All-Star Saturday Night. The 12 additional games will be televised during the second half of the regular season on another night of the week than the network’s traditional Thursday Night doubleheaders. TNT will televise up to 45 playoff games during the first two rounds and will have exclusive coverage of the conference semifinals games it telecasts and one of the conference finals each year.  Turner’s multimedia platforms will have the ability to stream TNT-televised games, highlights, and non-game programming on a live, delayed and on-demand basis. Additionally, Turner will maintain TV Everywhere rights that allow for all NBA content airing across Turner Broadcasting networks to be streamed live, delayed and on-demand across the company’s multiple digital platforms.

“This is a significant deal for our company and we are pleased to continue our long-standing partnership with the NBA, its fans, owners and players,” said Levy. “The agreement locks in some of the most valuable, original, premium live sports programming that we’ll continue to monetize across TNT and all other platforms within our extensive portfolio and will help further grow our businesses into the next decade.”

ABC will continue to televise up to 15 regular-season games on an exclusive basis, beginning on Christmas Day and continuing on Sunday afternoons starting in January, with the ability to move a few Sunday games to ESPN. The postseason will feature the entire best-of-seven NBA Finals in primetime on ABC.  ESPN and ESPN2 will televise up to 85 regular-season games primarily on Wednesday and Friday nights, an increase from 70 regular-season games under the current agreement. ABC, ESPN and ESPN2 will also televise up to 30 playoff games in the first two rounds, while ESPN will feature exclusive coverage of the conference semifinals games it televises and one of the conference finals each year. The network will also have exclusive coverage of the NBA Draft and NBA Draft Lottery each season.  ESPN will have the rights to stream its games and provide additional NBA content on a live, delayed and on-demand basis across all of its multimedia platforms, including ESPN.com, and WatchESPN. ESPN Audio will remain the national broadcast home of the NBA and feature an increased package of games, including regular-season and playoffs.

”The NBA has never been more popular globally and it continues to grow under Adam’s leadership,” said Skipper. “By acquiring significantly more NBA content on both existing and yet-to-be created platforms, we will establish a vibrant year-round relationship with the NBA and bolster what is already the sports industry’s most impressive and impactful collection of media rights.”

The NBA will continue its ground-breaking partnership with Turner for NBA Digital through which the companies manage jointly the NBA’s digital assets including NBA TV, NBA.com, NBA Mobile, NBA LEAGUE PASS, and WNBA.com. Launched prior to the 2008-09 season, the partnership will run through the 2024-25 season.